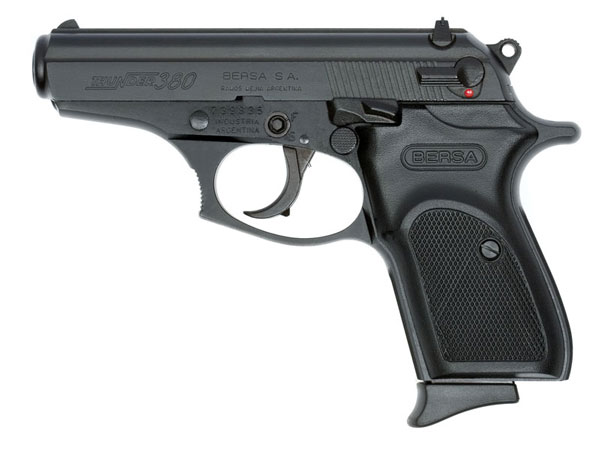 Times are tight. But in truth, that’s nothing new. A restricted shooting budget is a reality for some of us, if not all of us, at some point or another. Whether its college tuition, a new baby or a less-than-stellar pay grade at work, a skinny wallet may seem like an imposing barrier to obtaining a reliable defensive handgun. Sometimes folks think they have to settle for a cheap, possibly unreliable handgun until their luck changes. Fortunately, that’s not the case.

A variety of gun manufacturers provide affordable, yet reliable, carry gun options. They may not be the fanciest guns on the shelf, and some of them will not last through the thousands of rounds some of the more expensive guns can handle. However, the guns here will fill a pocket, purse or holster, and will provide personal protection at a reasonable price.

The Bersa Thunder is a self-defense gem that maintains a quiet, but loyal, following here in the United States. It’s an impressive pistol for the price, showing excellent craftsmanship and reliability often lacking in affordable imports. It is a better gun than some similar models that cost two or three times as much. The Thunder is a traditional double/single action with an exposed hammer, steel slide and an aluminum alloy frame.

So why should you consider a compact 7+1 single-stack .380 ACP that tips the scale at 20 ounces when tiny little pocket models are available? The Bersa Thunder exhibits such good ergonomics and recoil management. While pocket-rocket .380s can be almost painful to shoot, this pistol is comfortable and easy to manage with plenty of grip to hold on to, not to mention the easy-to-use sights and the smooth, crisp trigger pull.

Charter Arms currently produces over 70 variations of their compact defensive revolvers, with several models available at or below the $400 price mark. While Charter revolvers often cost less than their competitors, this doesn’t mean they’re “cheap.” Years of experience have gone into the design of these revolvers to make them sturdy and dependable. Charter Arms proudly manufactures 100-percent American-made revolvers with all of the parts constructed in-house or by vendors within 50 miles of the plant.

An excellent example of durable carry gun at a fair price is the Undercover .38 Special five-shot revolver. Rated for +P ammunition, this all-stainless steel gun is available with an exposed hammer or in a double-action only configuration. It arrives with a hand-filling rubber grip and fixed sights. If you’re willing to pay around $70 dollars more, you can shave four ounces off the weight with the Undercover Lite models.

The FMK 9C1 is an American-made polymer framed semi-auto chambered in 9mm. The overall dimensions of the pistol are similar to a compact Glock or medium-frame Taurus. Guns in this size range offer a useful balance of shootability and ease of concealment for legal carry. The 9C1 weighs 23.45-ounces unloaded, accepts 14-round magazines, and it features an accessory rail for lights or lasers. One of this pistol’s standout features is its exceptionally comfortable grip configuration and low-recoil feel. With an MSRP of $399, this pistol is hundreds of dollars less than other polymer, striker-fired pistols in its class.

What’s more, FMK is not afraid to let customers know just how they feel about this country. The 9C1 pistol could have been stamped with the words “Made in America.” Instead, the ejector is marked “Proudly American.” The frame says, “Thank You U.S. Soldiers.” The slide plate contains the words “Freedom” and “Liberty,” with the magazine base plate reading “E Pluribus Unum.” These are the markings of the plain-slide version of this pistol. FMK also offers the Bill of Rights version of the 9C1 with the first ten amendments to the U.S. Constitution engraved on the slide. Buying this affordable pistol will keep your dollars right here, supporting a company that’s willing to stamp their patriotic devotion to this country into the guns they sell.

Kel-Tec provides a number of reliable and affordable pistols, one of which is the model PF-9. It’s a slim, single stack 9mm pistol designed with concealed carry in mind. This pistol is narrower by under an inch and lighter than Kel-Tec’s double-stack P-11 9mm. However, it offers greater stopping power than the diminutive P3AT in .380 ACP while remaining small enough for pocket carry. The PF-9 carries 7+1-rounds of 9mm ammunition. Just like their other pocket autos, it has a locked-breech design, which allows the pistol to weigh less while keeping the slide easy to cycle. The steel slide is topped with a useful set of 3-dot sights. The rear sight can be adjusted for windage using the provided Allen key.

The trigger is a true double-action only. Although the trigger pull is long, it’s smooth and consistent. Once you get used to a semi-auto trigger with a revolver-like length of pull, it’s quite comfortable to work with. Internal safety prevents the pistol from firing unless the trigger is pulled. The slim grip frame is textured for positive traction and is long enough to provide a true two-finger grip. If you want a little more support for your lonely pinkie finger, the pistol arrives with an extended base plate to swap out with the flat base plate on the magazine.

A good pocket pistol is hard to beat for ease of concealment. Although other concealable autos chambered for .380 ACP had been on the market for years, something about the Ruger LCP set the market ablaze with an invigorated passion for small pistols chambered for mid-sized calibers. While the media has moved on to 9mm and .45 ACP pocket pistols, Ruger’s LCP remains a popular choice for concealed carry.

The simple, sleek, and solid little LCP only weighs 9.4 ounces unloaded. All the edges have been beveled to make the pistol feel smooth to hold and to holster. The frame provides a true two-finger grip, so it’s manageable to practice with. It’s definitely a short-range defensive pistol with its small sights, but the LCP functions reliably with a variety of .380 ACP loads. If you feel the need to enhance your LCP with a laser sight, trigger guard models from Laserlyte and Crimson Trace are available.

One of Ruger’s most popular, affordable defensive handguns has been the P-Series 9mm. Although the original P89 models are no longer in production, the polymer-framed P95 is still available at a fair price. While this pistol is utilitarian in design, it works reliably, it’s easy to service, and plenty of holsters and spare magazines are available for it.

The blued steel slide is topped with a fixed 3-dot sight system, with rear cocking serrations. The action is a traditional double/single action with an exposed hammer. In other words, it has a long heavy trigger pull for the first shot followed by a short single-action trigger thereafter. The ambidextrous safety also acts as a decocker for the hammer. If you would prefer a stainless steel slide, it will scoot the price about $30 dollars higher. This is not the lightest or fanciest carry gun on the market, but it certainly is one of the most reliable in this price range.

Smith & Wesson has recently announced the release of two new self defense semi-autos designed to deliver reliable performance at an affordable price. One of these pistols is the SD40 VE, chambered in the potent .40 S&W cartridge. This full-sized pistol is available with either two 10-round or 14-round magazines. With a 4-inch barrel and an overall length of 7.2 inches, the SD40 arrives with an unloaded weight of 22.7 ounces and a slim width of 1.29 inches.

The stainless steel slide, paired with the black polymer frame, offers a distinctive two-tone finish along with aggressive front and rear slide serrations and a standard 3-dot sight configuration. The ergonomic grip has an 18-degree natural point of aim and aggressive front and back strap texturing. A number of accessories from companies you trust, including Crimson Trace, Galco, DeSantis Gunhide and Blackhawk! are already available.

The Bersa Thunder is a self-defense gem that maintains a quiet, but loyal, following here in the United States. It’s an impressive pistol for the price, showing excellent craftsmanship and reliability often lacking in affordable imports. It is a better gun than some similar models that cost two or three times as much. The Thunder is a traditional double/single action with an exposed hammer, steel slide and an aluminum alloy frame.

So why should you consider a compact 7+1 single-stack .380 ACP that tips the scale at 20 ounces when tiny little pocket models are available? The Bersa Thunder exhibits such good ergonomics and recoil management. While pocket-rocket .380s can be almost painful to shoot, this pistol is comfortable and easy to manage with plenty of grip to hold on to, not to mention the easy-to-use sights and the smooth, crisp trigger pull.