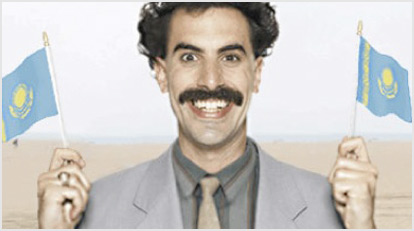 Officials at the 10th Arab Shooting Championship Thursday in Kuwait graciously awarded a Kazakhstan athlete a gold medal, but accidentally played the country’s fake national anthem from the movie Borat during the award ceremony.

The Kazakh gold medalist Maria Dmitrienko, who won in trap shooting, politely stood by while listening to the parody that brags about Kazakhstan’s superior potassium, advanced filtration system that removes 80 percent of human waste, and clean prostitutes.

The satirical film follows Borat, a Kazakh journalist, through his exploration of America and American values. Although it has been widely acclaimed, it has also been widely criticized for its portrayal of Kazakhstan and its citizens, and use of interviews. The film was actually banned in the entire Arab world (excluding Lebanon).

The event’s organizers said they accidentally downloaded the song while preparing for the event and played it unintentionally during the ceremony. They have since released a statement apologizing for the incident and the president of the Asian Shooting Federation, the organization that sanctions the event, personally apologized to the team.