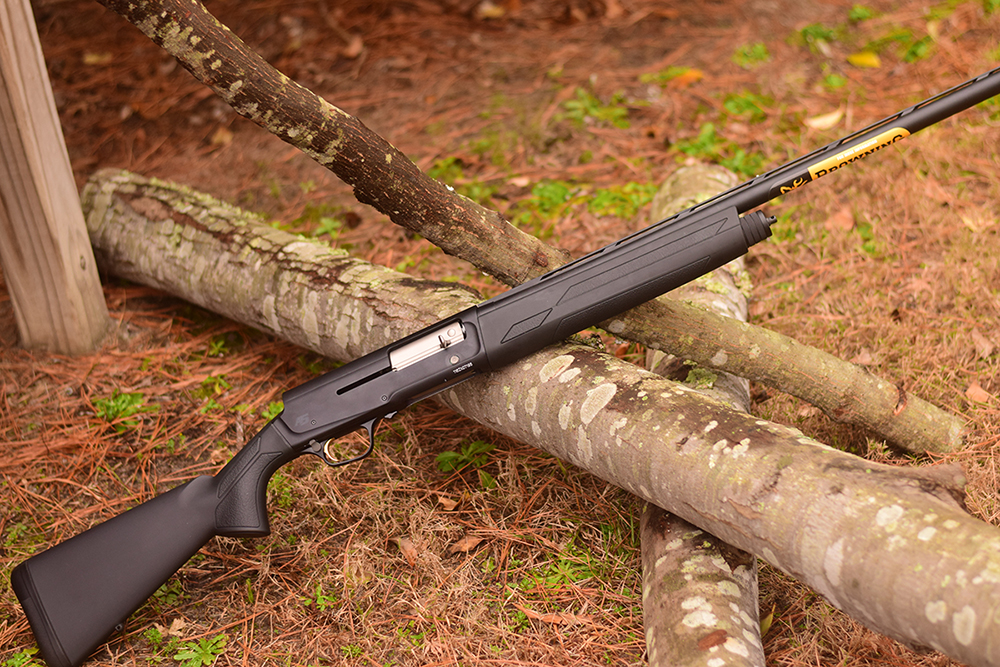 The Browning A5 Stalker, dressed to the nines and ready for business. (Photo by James Grant)

Modern self-loading shotguns are a force of reckoning. Align your sights, squeeze the trigger, and send a hand-full of projectiles at incredible speed down range, rinse and repeat. Modified choke and bird shotobliterate clays; full choke and duplex loads nail turkeys; cylinder bores with slugs drop deer; andbuckshot stops home invaders. Few tools are so versatile. The versatility of a pump-action shotgun shouldn’t be discounted, though neither should the rapid-fire capability of an auto shotgun.

When I went to pick up the new A5 from my FFL I was trepidatious. I prefer shotguns hefty if I intend to employ buckshot or slugs, but the A5 was so light I was worried it was a display unit. This, however, was of no concern to the employees; all of whom asked if they could buy the Browning after the article posted. Who could blame them? The A5 Stalker looks like Bentley furnished a Stealth Bomber then had a child with John Moses Browning’s Auto-5.

The A5′s predecessor, the Auto-5, was notorious for its stout recoil. Though most of these claims stem from incorrectly adjusting the recoil ring, the negative reputation persisted. If the user had the gun set “wide-open” to shoot reduced recoil loads and fired powerful rounds through the Auto 5, the recoil is incredible. When the original Auto 5 was introduced recoil was not a huge concern since it was the only automatic shotgun on the market. The design is quirky, yet functional and void of human niceties. Thankfully the A5′s inertia-operated rotating bolt tames the recoil of the stoutest 12-gauge loads while maintaining classic Auto-5 reliability and an iconic humpbacked appearance.

Fiber optic sights and interchangeable chokes are a few of upgrades added to the A5. (Photo by James Grant)

The A5 weighs 7 pounds, which is misleading since the balanced A5 feels similar to an over/under despite additional poundage. Incredibly, the light-weight A5 has less recoil than my old Remington 870 Wingmaster and points faster. While the lightweight synthetic stock may cause the A5 to kick more than its arboreal-laden brethren, if you’re hiking the A5 around in the woods the reduced weight will be a god-send. You also won’t have to worry about water damage or accidentally denting your A5′s furniture while climbing aboard your duck boat.

In my review I utilized both 2.75-  and 3-inch shells in buck, bird, bolo, slug, mixed and duplex loads.  Freshly oiled, the A5 ran through 850 rounds without incident. The A5 ran nearly 100 percent with only a handful of cycling hiccups when using dog training loads or mini-shells. The only reason I stopped shooting was due to my shoulder after a 50-round rapid fire string of 3-inch slugs.

The new A5′s kinematic action is butter-smooth with no points of resistance when feeding either directly into the chamber or from the magazine tube. Old Auto-5 connoisseurs familiar with the clunky Auto-5′s action will marvel at how quiet and smooth the new A5 runs. Browning has outdone themselves with the new A5′s internals.

All the A5′s controls are right where you need them. (Photo by James Grant)

The A5′s controls are easy to reach and give positive feedback. I encountered some issues rapidly loading shells into the mag tube while wearing gloves, but this was easily remedied by using smaller shells or removing the gloves. Despite my towering 5-foot 9-inch stature, I have length of pull issues with shotguns, especially pump-actions. I’m no mini-me, but I’m a short guy and an incorrect LOP will fatigue my arms quickly. Thankfully the A5′s LOP adjusts to individual users with the included spacers. Combined with the silky smooth rubber-like synthetic furniture, the A5 looks and feels as good as it shoots.

Browning has countless legions of fans for good reason, they make blue-collar guns with white-collar aesthetics. If you’re looking to retire an Auto-5, replace an aging automatic shotgun, or graduate from a pump to a semi-auto, look no further than the new Browning A5 Stalker.