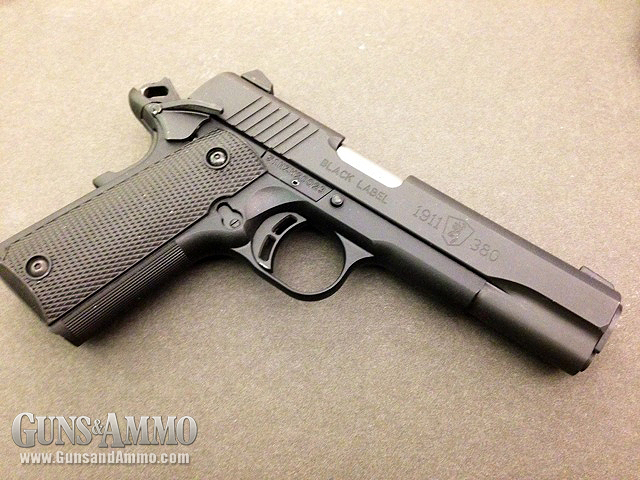 Two of John M. Browning’s original inventions, the Model 1911 handgun and the .380 ACP cartridge, have been brought together in an unexpected way. Unlike most 1911-styled .380 pistols currently on the market, the new Black Label 1911-380 is a scaled-down pistol that’s 85 percent the size of the Model 1911A1 in .45 ACP. Most significantly different from other .380-caliber 1911-style pistols are that Browning’s small parts mechanically function like a full-size .45. The single-action 1911-380 utilizes a precision-built composite frame and components that have evolved over a century make this a contemporary carry gun (i.e., extended controls that make it ideal for sport shooting and personal protection). And, the 1911-380 is made in the USA.

The first time Guns & Ammo editors handled Browning’s miniature 1911 was back in 2011, just in time for the celebration the .45’s centennial anniversary. The 1911-22remains a popular rimfire. Though many .22 rimfire handguns are not regarded as accurate, the 1911-22 seems to impress shooters with its thin grip and familiar “cocked-and-locked” handling. A composite frame for the 1911-22 was introduced in 2014 to further lighten this pistol, and that has been carried over to Browning’s latest design, the Black Label 1911-380. With such a small frame, all of the controls are easy to reach for most any shooter (including the slide lock), without the need to break a good shooting grip.

Black Label is a growing division of Browning that designs particular products with direct feedback of their connections in the Special Operations community, law enforcement and civilian specialists. Browning is seeking to perfect a comprehensive line of tactical gear to cover any mission including knives, lights, eyewear, clothing, equipment cases, etc. The same goes for Browning’s handguns. The Black Label 1911-380 is given forward slide serrations rather than the standard vertical serrations. Black Label pistols are also provided with an extended ambidextrous thumb safety, which is easy to reach and intuitive to operate with either hand.

With its flared beavertail, the grip safety is a contemporary update to the John Moses’ original, but beavertails on full-size big bores do prevent hammer bite between the thumb and trigger finger. At the bottom of this grip safety is a checkered and raised bump above the mainspring housing, which is intended to compensate for a high grip that doesn’t positively contact the lower part of the grip safety. This bump usually forgives a shooter if, for whatever reason, a complete and positive grip is not established to depress the safety for reliable operation. Beneath it, the flat mainspring housing is given a slightly raised, non-aggressive textured pattern that matches the simulated checkering on the grip safety’s bump.

The frame is an engineering-grade composite that makes this pistol super light, almost as light as it’s .22-caliber cousin. The exact formula of this plastic has been kept secret from us, but it holds everything together securely. The Black Label model came wearing a set of black composite grip panels. Want to make it your own? Several accessory grips are available including imitation-aged ivory grips, pearl grips, imitation rosewood and Black Label grey-colored grips. The same grips offered for the 1911-22 will fit the 1911-380 so don’t pass on a set that you fancy because it might be labeled “1911-22.” These grips are offered at a suggested retail between $62 and $78, but we’ve surveyed them for sale at about half those prices.

Atop the slide, a set of black, no-dot pistol sights give shooters a traditional sight picture. The front is a plastic while the rear is a drift-adjustable ramped iron sight. The sights on the 1911-22 are regarded by many to be this pistol’s weakness. A deal breaker for some, we find most shooters just paint the front sight white or orange to achieve better contrast. You can certainly use a toothpick and craft your own three-dot sight system if you don’t want to visit a gunsmith. Unfortunately, the same issue exists with the 1911-380 and there are no aftermarket alternatives we know of.

The magazine is constructed using a steel body that’s heat treated for long-term feeding reliability and long life. The 1911-380s are standard with an eight-round capacity, and each black ABS gun case should contain two of them. These are very dependable.

Unlike most of the modern pocket pistols that chamber the snappy .380 ACP cartridge, the 1911-380 is slightly larger to better manage recoil for improved control that makes follow-up shots faster and more accurate. Ironically, its grip is thin so it feels smaller in the hand than it should. Combine that with its lightweight and it makes sense why Browning decided to offer this single-stack in a caliber useful for concealed carry. Sorry, Browning already considered 9mm only to discover that pressures exceeded the pistol’s 85-percent design’s ability to reliably function.

The longer barrel increases bullet velocity for more downrange punch and improved accuracy than most .380s we’ve tested in smaller packages. The grip is compact, yet it is long and wide enough to allow the shooting hand full purchase for added shooting comfort. Though the frame is composite, or plastic, the slide is machined steel and given a matte-black finish. The 4¼-inch barrel is rust-resistant, and given a recessed crown to protect the pistol’s accuracy potential. The action is a locked-breech with a single-action trigger that lets the hammer forward after 5½-pounds of pressure is applied.

Because it’s a Browning design, and not a cosmetic look-alike, this pistol is superbly reliable. G&A Editor Eric R. Poole recently flew out to Browning’s headquarters in Morgan, Utah, and spent a couple days learning the ins and outs of the 1911-380, which culminated in a daylong shooting session with a couple cases of Winchester’s new Train & Defend loads for the .380 caliber. Five early pistol samples were on hand for abuse, and after several hours, they were scalding from relentless testing. Gloves became a necessity. However, Poole kept shooting until every round was fired and came back with two takeaways: these pistols are reliable and accurate. No malfunctions were observed, and, by the end of the day, testing went array as he quit shooting steel and paper and broke several clays placed on berms at 100 yards.

By September, G&A received a production sample for this exclusive testfire. Reliability and, after the rear sight was drifted to center, accuracy was confirmed on paper at 15 and 25 yards. In fact, the accuracy results at 25 yards were almost unbelievable with Poole shooting sub-two-inch groups using a 90-grain Federal Hydrashok in the company of several witnesses at the range. The Winchester Train & Defend proved well also. In fact, the ability to carry a more effective 95-grain hollow point and then train with a ballistically similar (but cheaper) 95-grain full-metal-jacket projectile is a concept worth applauding. Our tests indicated that the velocity and accuracy between the Train and Defend loads do mirror each other. At the end of the day, our results in the 1911-380 are unrivaled with .380 pistols we’ve recently evaluated.

Though many will argue against the use of a .380 as a primary self-defense caliber, it would serve many gun owners that live with dexterity issues and have trouble racking the slide or find it difficult to comfortably grip a larger frame. Or, maybe you’re just tired of living with a hard-recoiling range gun. If you’re in the market for a deep-concealment back-up pistol or carrying a .380 doesn’t bother you, this new Browning 1911 is deserving of your attention. It’s extremely light, shoots fast, accurate and is simple to keep follow-up shots on target.