Every MSR owner loves accessories. Here are some of my picks.

Modern sporting rifles (MSRs) and guns like them are becoming more and more popular in America. Many firearm-owning households have an AR- or AK-type gun—or something similar to one, such as the Tavor pictured in this article—in their safes. These firearms are prized for their modularity and accessorizing options in addition to their effectiveness as sporting and self-defense arms.

People looking to supply their shooting sports enthusiast with a little holiday-gift cheer might be at a loss with all the lasers, lights, and sights available. I’ve collected a few of my favorite MSR-related pieces of gear I’ve been using over the past several months in this gift guide to provide some suggestions for prospective buyers.

Given that every gun enthusiast has specific aims for what they want their MSR (or MSR-alike) to do and accessorize accordingly, I’ve tried to keep my picks as broadly applicable and affordable as possible. 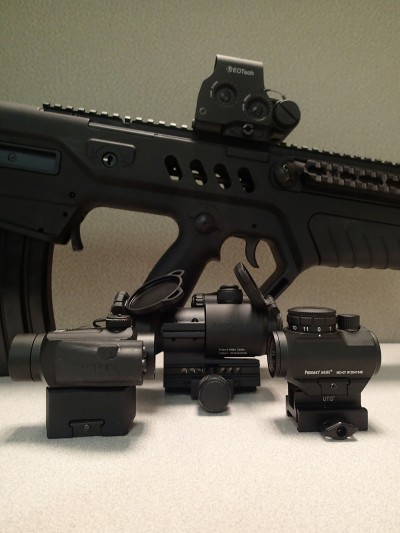 Though my Tavor currently sports an EOTech, it once mounted a Vortex SPARC (left), Aimpoint PRO (center), and Primary Arms MD-07 (right). All performed admirably.

Few optic devices are as well-suited to the MSR as the non-magnified red dot or reflex sight. These sights originally gained popularity through military and competition use thanks to how quickly they allow an operator to acquire a solid sight picture. Nowadays they can be found on many shooters’ recreational and self-defense guns. Prices for these items vary wildly based on quality and brand, but here’s a breakdown of a few I’ve had the pleasure to use.

Quick note on minutes of angle (MOA): The size of a dot or reticle is often measured in minutes of angle. To avoid going into a long digression, learn more about MOA from the National Shooting Sports Foundation here.

For the budget-minded buyer, consider Primary Arms’ MD series of dots ($80 without base). They’re perfect for a dedicated range gun and great “first red dot” sights. They’re made overseas, but Primary Arms has a tight grip on quality control and very few have issues. Primary Arms also has excellent customer service, so if you do encounter problems they’ll be able to rectify them. The MD-07, the model I’ve used, has an average-sized 3 MOA dot and has yet to fail me at the range.

Moving up in price, there’s the Vortex SPARC ($180-200). The SPARC is another great “economy” dot that will provide thousands of hours of reliable projection on a single battery. A new-in-box SPARC also comes with several different risers to accommodate a variety of iron-sight heights, sparing a first-time user the guesswork of finding the right base height. The package additionally includes a nifty screw-on 2x magnifier, which is a fun add-on. I used the 2 MOA SPARC on my Tavor for months before upgrading to an Aimpoint and eventually an EOTech, during which it held zero and never failed.

Next up on the ladder is the Aimpoint Patrol Rifle Optic, or PRO ($360-400). Swedish-made Aimpoint sights were some of the first dots used by the US military, and for good reason. They’re reliable, built like tanks, and can project a dot for years on a single battery. The PRO, which sports a 2 MOA dot, is marketed towards law enforcement and those who seek always-on functionality. They are perfect for a self-defense “grab and go” gun. Since picking up a PRO to test back in August, I’ve had it permanently set to “on.” Aimpoint claims they can run for up to three years at a time on a single battery—quite an attractive feature.

At the top of my reflex-sight ladder is the EOTech EXPS2 series ($500-550). I’ve been using an EXPS2-0 on my Tavor for the past month, and it has supplanted the PRO as my favorite non-magnified optic. Unlike more conventional red dots, the EOTech is a holographic weapon sight that projects a reticle in its optic window instead of a simple dot. In the case of the EXPS2-0 I’ve been using, the reticle is a 1 MOA dot centered within a 65 MOA circle. This reticle allows me to bracket and fire at a target even quicker than dots. The EXPS2 series utilizes a quick-detach mount, whereas the XPS2 does not. Also used by the military, the one downside EOTechs have is that they usually have shorter battery lives than dots—“only” about 600 hours.

There’s much debate in the gun community about whether EOTech or Aimpoint products are better, but in the end I find it a matter of preference. Both are the go-to choices for shooters seeking tough top-of-the-line reflex sights that’ll take anything you can throw at them.

If you want to give the enthusiast on your list the industry-standard firearm light, look no further than the rail-mounted Streamlight TLR-1. Frequently available on Amazon for $100 or less, the TLR-1 mounts to any standard Picatinny rail. They can run for almost three hours continuously and make excellent accessories for home-defense rifles, carbines, shotguns, and pistols.

The Crimson Trace MVF-515—three great accessories rolled into one package.

If you want to triple-dip this holiday season and provide the best of three worlds to a shooting enthusiast, give the Crimson Trace MVF-515 a consideration. The MVF-515 is a combination vertical grip, flashlight, and laser. The entire package mounts to a standard Picatinny rail. Its smartly-placed buttons allow rapid, instinctive activation of the laser, light, or both. It’s a great accessory for a home defense arm, condensing two aiming and identification aids into a single item. The MVF with a red laser usually retails for around $400, while the one with a green laser usually commands a price closer to $600.

I live by the adage that every gun enthusiast can always stand to have a few more reliable magazines for their firearms. Now that the buying panic is over, fair prices are available again on a variety of magazines. The magazines you might buy for a person obviously depend on the type of MSR they have—here are a few suggestions based on the appropriate gun platform. It should go without saying, but before buying standard-capacity (30 rounds) MSR magazines, ensure they are legal to own where you live!

For AR-15 owners, nothing quite beats the value of Magpul’s PMAG. Third-generation PMAGs gradually became more available this year as panic buying died down, and they are now available for as little as $15 per magazine. Restricted-capacity options are also available for about the same price, as is a higher capacity 40-rounder—which is great for blasting away at the range.

Good magazines for AK-type guns tend to run a bit more expensive than their AR counterparts. Whereas newly-made mags abound for ARs and are the go-to choice for such guns, for AKs, military surplus is often king. For 7.62x39mm AKs, you can’t beat the classic look and reliable function of a surplus steel mag, which usually run in the $17-25 range and have varying availability at places like AIM Surplus. Magazines for 5.45x39mm AKs tend to be a bit more expensive at about $30 each.

HSGI’s SureGrip Padded Belt makes a great bug-out belt. Attached in this picture is an HSGI TACO X2R pouch holding one 30-round PMAG and one 40-round PMAG.

Much noise is made about bug-out bags in the gun and “prepper” world, and they have their value. But accessing spare magazines and other gear from a backpack in a high-stress situation could be difficult and waste precious time. A chest rig might work, but those can be awkward, heavy, and cumbersome (cue clip from Snuggie commercial here). A while back I decided to try out High Speed Gear Inc’s (HSGI) SureGrip Padded Belt ($75) paired with a Cobra Rigger Belt ($64), and now I can’t imagine going back to anything else for bug-out gear. The SureGrip has ample and easily-accessible MOLLE webbing for mounting pouches, first aid kits, and what not, while the Cobra’s quick-release buckle makes donning the “battle belt” quick and easy.

What better way to complement a magazine stocking-stuffer than to accompany it with something it can beproperly stuffed into? MOLLE-mountable magazine pouches are great gifts for the gear-conscious rifle owner. Some of my proven favorites include HSGI’s X2R TACO pouches ($42), which are capable of holding just about any type of rifle magazine, and Tactical Tailor’s Mag Panels and Pouches ($20-45).

Those are my top picks for this season. Got any of your own? Think I’m totally wrong about something? Let me know in the comments.