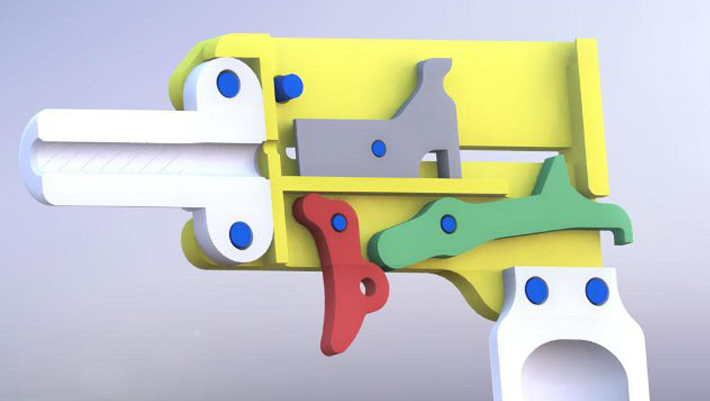 The nail that acts as the 3D-printed Liberator pistol’s firing pin is the only non-plastic component in the firearm needed for it to function.

Cody Wilson may have astonished the world at large when he released the first fully printable firearm last month, but those who had been watching the progress of 3D printing technology knew it was only a matter of time.

Dubbed the “Liberator,” the firearm is a single-shot .380 handgun constructed from 16 ABS plastic parts and one metal nail for a firing pin. Wilson is also the founder of Defense Distributed, an organization devoted to exploring 3D printing and advocating for popular access to arms and the Second Amendment. Days after the Liberator’s release, officials from the Department of State requested that Defense Distributed remove the files for the Liberator from its site, but not before the data files for the Liberator were downloaded over 100,000 times.

The files would allow users to theoretically print the firearm on any capable printer. Coinciding with the release, Wilson demonstrated in a firing test that the pistol was functional and capable of firing .380 rounds. Numerous users across the globe then began printing out the pistol for their own tests, but those who lack a 3D printer might find themselves wondering how this almost-fully plastic firearm works.

Below are two videos that describe how the pistol can be assembled after printing, and how the mechanisms inside the Liberator work to fire a bullet. A metal block has also been included in these examples in order to bring the firearm in line with federal laws.

How to assemble a Liberator:

How the Liberator functions:

Other designers are exploring different avenues with 3D printing technology, including plastic shotgun slugs and “hybrid” AR-15 lower receivers. You can read about them here.