“Think for Yourself” with Austin Weiss

I get it; I deal with it every day. The older lady clinching her purse a little tighter as I walk by, or the stares from the older couple as they talk about my tattoos and stare like I can’t hear or see them. Some of you are probably looking at me confused or maybe even concerned. Why am I talking gun rights?

It might be a shock to some, but I have never been arrested. As a gun collector, I’ve had my background checked more times in one month than most people have in their entire lifetime.

I’m a blue-collar welder/fabricator. I’m no different than any other hard-working American. I run a custom car and bike shop called The Garage, Inc. My team and I design, build and restore bikes and fulfill any other crazy requests my clients may have, from custom Segways to horse chariots.

As a small business owner knows, this can require working late and alone to get the job done.

That’s what originally made me get a gun in the first place. I’ve always worked late nights and in some not so great neighborhoods when I first started out.

So why am I telling you all this? Because I’m a citizen of this nation who wants to keep his right to bear arms.

The next generation of gun enthusiasts will come in various looks, as you can see. But I am on the same page as the over-under shotgun guys I shoot with on Wednesday nights, as my hunter friends are, all the way to the personal protection guys I train with.

Guns statistically do more good than bad, and unfortunately the government has their own agendas to remove these “killing machines” off the streets.

But not one proposed law would do anything but affect us law-abiding citizens.

People want to blame the tool used, not the person behind the tool. I say we ban evil. Better yet, let’s ban “assault evil.”

It doesn’t matter what we do or what bans we put into law. There will always be evil. We just can’t ban EVIL.

Guns have always been a part of the American way. If we want to keep our rights, we all need to come together and stand as one.

I don’t care what nationality, age, sex or religion you might be. If you’re pro-gun and believe in our Second Amendment right, then we the people have to stand side-by-side and push back.

Wake up. Pay attention. Every day lawmakers try to find some way to stop us law-abiding citizens from having the right to bear arms. Do your own research. Don’t listen to the news. They put out what works for them; they have to sell the news. Don’t believe the hype. People judge me the same way they judge guns. It’s because they don’t want to take the time to check the facts for themselves. 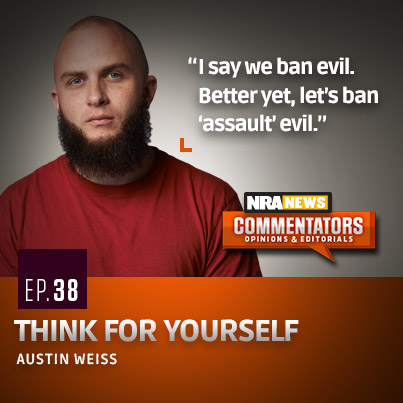