Our government isn’t going to disarm us. It can’t. Let me explain why.

We currently live in a constitutional republic. Because of that, our elected and appointed leaders are legally obligated to defend and uphold the Constitution.

Our Constitution currently protects our citizens’ right to keep and bear arms.

There are really only two ways our government could disarm us: They could abandon the Republican principles upon which this country was founded, or the people themselves could willfully disarm.

One way our government could disarm us would be to label us all enemies of the state. Historically, governments have disarmed people because they perceive them to be a threat.

Certainly, our nation has a rich history of disarming its enemies. After World War II we disarmed Japan and Germany. We used this same logic to justify the invasion of Iraq in 2003; they were our enemies and we believed they were armed. This is not unique to the U.S. All people justify disarming anyone whom they believe is a threat.

While our government leaders can’t justify forcibly disarming us, they could make the case to the people that we no longer need an armed citizenry. That would require amending the Constitution and eliminating the Second Amendment. For that to happen, we need a serious and comprehensive national discussion about the modern case for, or against, an armed citizenry.

But right now, our elected officials aren’t openly inviting debate about eliminating the Second Amendment. Instead, they are increasingly enacting overly restrictive legislation that effectively makes it impossible to fully enact our rights.

We have a historical precedent for this type of active infringement on constitutional rights via legislation. The late 19th-century Jim Crow laws enacted poll taxes and literacy tests as pre-conditions for voting. Many southern states enacted these rules to specifically disenfranchise African-Americans and freed slaves. At that time, the Constitution gave all men the right to vote. Then the state laws made it prohibitively difficult for blacks, immigrants and poor whites to do so.

This stifles national debate about the Second Amendment and allows our leaders to hide behind a haze of regulatory and legislative power. It also circumvents the will of the people and subverts the supremacy of the Constitution.

I started the video by saying the government is not going to disarm us, but that’s not entirely true. It would cease to be our representative government if it forcibly disarmed us. Politicians in Washington refuse to engage in fair and honest debate about an armed citizenry and therefore preclude the citizenry from willfully disarming itself. And so, they exploit the powers we’ve entrusted them with by legislating our citizens out of arming themselves.

For all its flaws, for all its troubles, for all its disappointments, we still live in the United States of America. It may not be a perfect representative government, but the ideals upon which it was founded are the most perfect we’ve ever known. It’s our responsibility to uphold those ideals. The burden falls upon those who represent us to protect those ideals—to enact those ideals. But when they don’t, the burden falls on us to demand accountability and public debate. 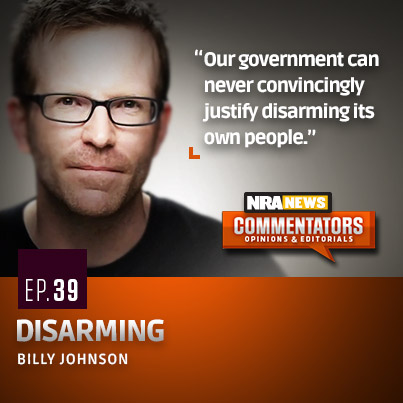