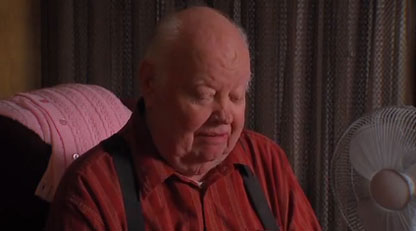 If you’re a thief, there are a couple of warning signs that you should watch out for. A dog bowl and a leash in the front yard would tip you off that you’re probably going to get bitten. A sign that reads, “Trespassers will be shot!” is pretty self-explanatory.

The home of 77-year-old Lloyd McCarty is similarly filled with warning signs. He flies an American flag on the front porch, he has a U.S. Marine Corps patch tacked to the wall, and he also keeps a framed picture of himself in his glory day as a Marine. If the home invader had noticed these clues then maybe he would have picked another house to rob.

According to reports, McCarty heard a knock on his door – a knock so light that it was suspicious — on Nov. 10. The shrewd veteran retrieved his .32-caliber pistol just in time to encounter the home invader breaking down his front door. With the casual devil-may-care attitude that only a war veteran can have, McCarty said, “He hit (the door) that hard and when he hit it that hard that’s when I shot the door. He went to a hollerin’ and screamin’. I could hear him going clear down the street hollerin.” He added, “Well, maybe I shoulda shot two or three times.”

So, what happened to the would-be thief? He learned the hard way that even 77-year-old Marine veterans still have some fight left. The bullet struck the home intruder in the abdomen, forcing him to flee the scene. Police caught up to the culprit and arrested him.

This story went exactly the way it should have gone – McCarty defended his home and his wife, and the police caught the bad guy. There really isn’t much room for argument here. What we can chat about, though, is the whole issue of warning signs.

Flying an American flag on your front porch isn’t the same thing as saying, “We have a gun and we’re willing to use it,” but it isn’t that far off.

Every gun owner has the opportunity to warn would-be thieves. Putting a sign that reads “I’m a lifetime member of the NRA” on your front lawn may very well scare off thieves, but on the other side of the coin having lots of signs on your property typically doesn’t look very nice.

What about our readers? Can thieves look at your house and immediately know that they’re going to get shot if they try anything stupid? If you do show any warning signs on your property (even subtle ones like an American flag), why do you do it? And for the other gun owners out there, what’s stopping you from putting up a “Trespassers will be shot” sign?