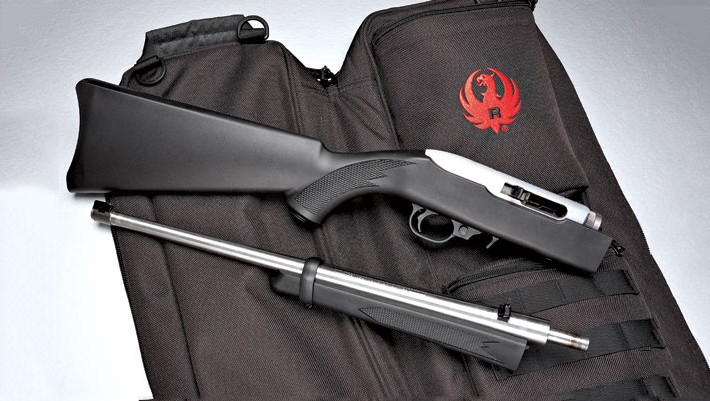 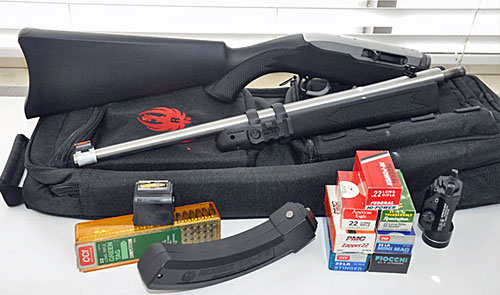 When Ruger’s Ken Jorgensen showed me a pre-release 10/22 Takedown rifle I didn’t quite get it. After all, doesn’t everyone have at least one 10/22 by now? Ruger has been making them for years and, although I thought the Takedown was interesting, I didn’t put enough thought into it to “get it”. By the time the January, 2013 SHOT (Shooting Hunting and Outdoor Trades) show came around and Ruger formally introduced the Takedown I was starting to catch on. So were a lot of other people, as the Ruger booth was mobbed and it was clear the new 10/22 was going to be a hit. Finally wising up, I asked Ken to send me one for evaluation. After working with it I can tell you this: Ruger isn’t getting this one back, I’m buying it.

The humble little .22 Long Rifle (LR) has been the most popular caliber for generations, never more so than now. Like millions of other kids I grew up with a .22 rifle in my hands but as I grew older the .22s got left behind while I pursued other interests. Now, with centerfire ammunition being scarce and expensive, the little .22 is enjoying a huge comeback; not just for kids, but for everyone wanting to maintain their skills without having to mortgage the farm. Too, everyone from preppers to backpackers, or those looking for a handy, durable and reliable firearm, is gravitating towards .22 rifles and pistols. With the 10/22 Takedown, Ruger has produced a .22 rifle that should appeal to all these folks and more.

At the heart of the 10/22 Takedown is the idea that the rifle can be quickly and easily separated into two parts and packed into a handy, portable carrying case similar to a backpack. There’s plenty of room in the case for spare magazines and ammunition, a survival or medical kit or, as Ruger suggests, one of their SR22 pistols. Additional gear can be attached to the bag, making it perfect for a grab and go setup or a kit to be stashed in a car, a boat or behind the seat in an airplane. My rifle is stainless steel, and, with the contrasting black synthetic stock not only looks good but is durable and highly corrosion resistant. Without a doubt, you could put the rifle away in it’s carry bag, leave it for years and expect it will be ready to go when needed.

The 10/22 Takedown is available in two models. My rifle is the K10/22-TD. It has an 18.5” barrel and weighs a scant 4.67 pounds. The other model, the 10/22-TDT, is black on black, with a black stock and blackened metal surfaces and features a muzzle break. Why, you might ask, would a .22 rifle need a muzzle break? Well, it acts as a thread protector for the threaded 16.62” barrel. Should you wish to add a suppressor, the TDT model is good to go. Along with the backpack style bag, both rifles come with one 10 round magazine and a Weaver rail that can be mounted on the receiver should you care to install an optical sight. 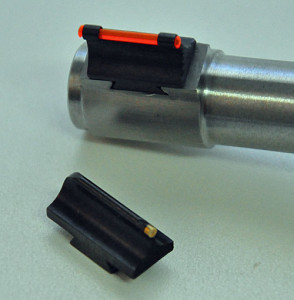 Speaking of sights, I had to suppress the urge to install a red dot or telescopic sight on this little rifle because shooting tiny groups off a bench rest isn’t it’s intended purpose. Not saying you can’t mount a scope; I chose not to because I wanted to keep the rifle as lightweight and durable as possible but I did make two changes to the sights. During initial firing I had a tough time seeing the gold bead front sight through the adjustable rear sight. As I get older, open sights get harder to see so I installed a Marble’s red fiber optic front sight I found among the extensive selection of parts and accessories available for the 10/22 in the Brownells catalog. Other accessories for the 10/22 are available at www.shopruger.com, including the other enhancement I made to the sighting system, the new LaserMax 10/22 laser. Listed for only $129, this red laser module is easily installed on the front of the stock and includes two rails to give you the option of mounting a light or keeping one in the kit to be slipped on when needed. A Streamlight TLR-1s high output light mounted on the left side rail worked great in conjunction with the laser for night shooting.

Okay, you’ve heard it over and over: Always read the instruction manual before using any firearm. The instructions starting on page 14 of the 10/22 manual are particularly important because they deal with how to adjust the lockup mechanism before using the rifle for the first time, as well as how to break the rifle down and put it back together. These are important instructions – read the manual. In my experience a 10/22 can shoot for a long time with minimal cleaning. When it’s time to do a thorough cleaning job the instructions in the manual cover the process step by step. Ruger also posts videos of field stripping and cleaning at www.ruger.com. 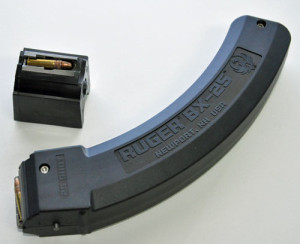 The 10/22 shoots better than I do with the open sights. Suffice it to say, getting quick hits at reasonable ranges was easy. Ruger’s rimfires are known for their reliability so I tested the 10/22 with every brand of .22LR ammunition I could dig out of the ammo locker, some of it 20 years old. As I expected, the Takedown fired it all with no malfunctions of any type. The only trouble I experienced was the slowdown in my shooting caused by pauses to load the magazine. Fortunately, Ruger sells a 25 round magazine for the 10/22. The BX-25 magazine is an excellent addition to the 10/22 Takedown kit and extends your shooting time. 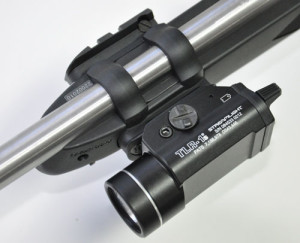 The Ruger 10/22 Takedown breaks new ground. It’s a plinker, a sporting .22 and a survival rifle that can be accessorized and adapted to any reasonable need. Equipped with a LaserMax laser, Streamlight weapon light and BX-25 magazine, this little rifle might be the perfect companion to keep at hand around a campfire. At a suggested retail of $399 it’s a lot of rifle for the money. Like I said, it’s a keeper.

Ed Head is a regular on Shooting Gallery and Down Range TV. He has worked for almost 30 years in law enforcement, first in the United States Air Force and then with the United States Border Patrol, retiring as a Field Operations Supervisor. During his Border Patrol career, Ed worked in a variety of patrol, investigative and training capacities. Ed has an extensive background as a firearms instructor, having trained thousands, ranging from beginners to police, military and special operations personnel. Having taught at Gunsite for 20 years, Ed first trained there under the world famous shooting school’s founder, Jeff Cooper, then later ran the school as the operations manager for more than five years. Ed lives in Chino Valley, Arizona, where he continues to teach and write.