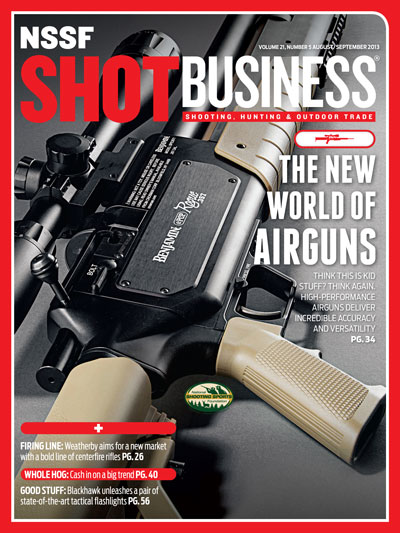 Congratulations to Slayton White and the team at SHOT Business for winning a 2014 FOLIO Award!

“We are honored to have been recognized by FOLIO: with an Eddie Award,” said Slaton White, Editor-in-Chief of SHOT Business. “In an age when the independent shooting sports retailer faces new hurdles nearly every day, SHOT Business’ aim is to give our readers an edge, providing tips from leading industry experts, the latest legislative issues, regional retail analysis, and more.”

The August 2013 issue of SHOT Business focused on gear, including features like “The New World of Airguns,” an in-depth review of the modern high-performance airgun; and “Going Whole Hog,” a retailers’ guide on how to cash in on the booming feral-hog hunt market. It also shared the summer’s most relevant news briefs, what was selling where, new products, the latest from the National Shooting Sports Foundation, and more.
SHOT Business is the modern magazine of the shooting, hunting and outdoor trade industry, designed to equip retailers, manufacturers and sales representatives with expert, real time information that will help them run better, more profitable businesses. The Bonnier Corporation publishes SHOT Business. The Bonnier Corp. is one of the largest consumer-publishing groups in the United States, and is the leading media company serving passionate, highly engaged audiences with more than 30 special-interest magazines and related multimedia projects and events.