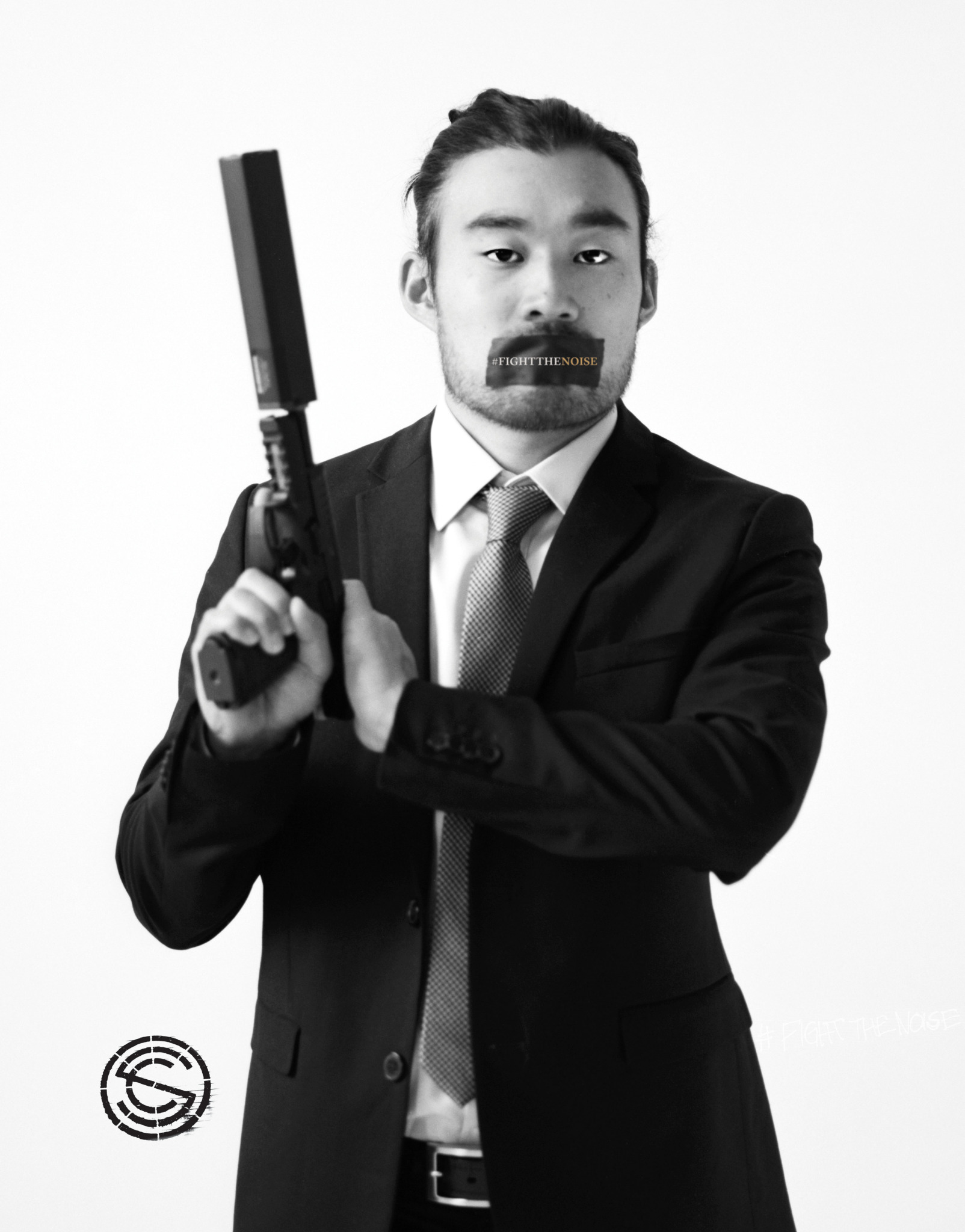 SilencerCo’s Fight the Noise™ campaign (officially referred to as a movement) is an effort to educate the general populace about individual rights and how they can play a role in supporting the broadening of personal freedoms related to the legal ownership of NFA (National Firearms Act) items.

First usage of this slogan was seen at SHOT Show 2015, at which SilencerCo was given the award of Best Booth.  This was also the first usage of the Fight the Noise tape covering participants’ mouths, which will continue to be iconic in the movement and symbolise The Suppressed™, as they will officially be referred to.  The Suppressed are law-abiding, gun-owning citizens whose voices have been oppressed by unjust legislation.  Press release and supporting images: https://silencerco.box.com/s/e6ezo15llcw15ntd2amezh83agkvj0no

Fight the Noise tape example images available for download and use:

As part of the movement and to reach broad audiences, SilencerCo is partnering with various public figures, beginning with professional MTB Freerider Cam Zink.  Some background: [http://xgames.espn.go.com/video/11391368/cam-zink-sets-world-record-mountain-bike-backflip] [http://www.mammothmountain.com/summer/bike-adventure/bike-park/athlete-profile-cam-zink]

Cam is a Mountain Bike Freeride extreme athlete who has won various prestigious competitions, including the Red Bull Rampage.  In addition to a being a well-respected and widely known Freeride athlete, Cam is also a firearms enthusiast.  SilencerCo met with Cam in beautiful Southern Utah for some riding and to experience shooting suppressed for the first time.

All social media references should be tagged with #FightTheNoise – the official tag of the movement.

Official Fight the Noise description that will be published on www.silencerco.com/fightthenoise:

What is Fight the Noise™?

Fight the Noise is a movement to regain our Voice.  To exercise our right to protect our hearing and silence the sound.  To be responsible gun owners and be treated as such.  We want law-abiding citizens to have the ability to purchase and own silencers without being subjected to excessive wait times, paperwork, and taxes.  We are the silent majority, and it is our time to be heard.  We are your Friends.  We are your Coworkers.  We are The Suppressed™.

Why Fight the Noise?

We Fight the Noise because “that’s just the way it is” doesn’t mean that’s the way it should be.  Because accepting hearing-damaging gunfire as the norm isn’t right, it isn’t responsible, and with your support, it won’t continue.  Silencers were first subjected to added taxes, paperwork, and processing time back in 1934 with the introduction of the National Firearms Act (link provided for more information).  We want to bring the laws surrounding silencer ownership into the twenty-first century and spread the word that yes, silencers are legal.  The Suppressed are changing the perception of an industry and leading the revolution with a clear message: Guns don’t have to be loud.

How to Fight the Noise?

Speak up for your right to silence.  By joining the Fight the Noise movement, you are loudly stating that The Suppressed have had enough.  So how do you show your support?  Fill in the form below; you’ll then receive an official Fight the Noise kit – including the iconic tape seen throughout our campaign.  Once you’ve received your kit, snap a picture of yourself proudly wearing the Fight the Noise tape across your mouth; this will symbolize that you are a member of The Suppressed.  Post these pictures to Instagram, Facebook, and Twitter with the tag #FightTheNoise.  Your silent protest images will be shared in real time in the feed below as a reminder that when The Suppressed stand together, our voice will be heard.

The Suppressed: Leading the Movement

SilencerCo will reach out to you during important times of legislative action; by adding your voice, we can become that much more effective in making ourselves heard.  To thank you for your support, we will send regular supply drops of #FightTheNoise propaganda and enter you into our monthly suppressor and EasyTrust™ giveaways – the winners of which are chosen solely from members of The Suppressed.

Now and then we will up the ante and choose a compatriot to receive a never-before-offered gift – starting with VIP treatment at SilencerCo’s own Precision Rifle Series™ Quiet Riot Match this June.  You’ll fly, stay, shoot, receive instruction from a SilencerCo product expert, and be given your own personalized rifle and silencer – all for free.  Because leading a movement is no small feat, and we believe it should come with perks.