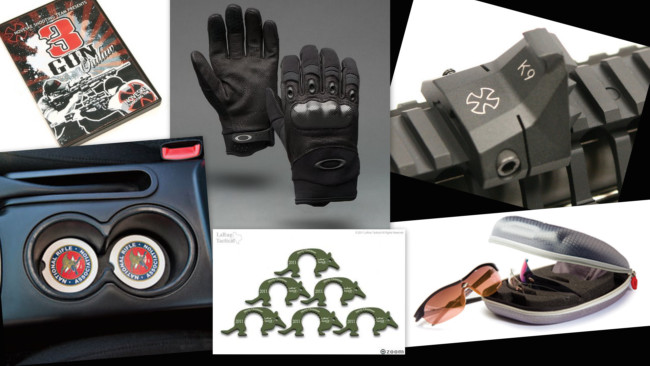 This article was originally posted by Kerrin Brinkman, to view the original source click here

With just a few shopping days left until Christmas, I’ve decided to put together my top ten picks (in no particular order) of great stocking stuffers for the shooting enthusiast in your life. If none of these options will work for those hard-to-buy-for shooters on your list, I suggest you trade them in for a new friend or family member who is less picky or has better taste. If you think I’ve left a “must have” off the list, leave a comment so I can see what I’ve missed!

This is a great DVD for those who are new to 3-gun competition or looking to step up their game. Jansen Jones and Rob Romero from the Noveske Shooting Team take viewers through advanced techniques for 3-gunning including transitions, shooting positions, strategy, and more. It’s not the same as attending a Noveske 3-Gun Training Class, but it’s the next best thing to learn from two of the country’s top competitors.

I’ve tried most of the major companies who make protective eyewear specifically for shooters, and Rudy Project is one of my all-time favorites. Their online store, www.e-rudy.com allows you to build your own kit by choosing the model, the frame, the lenses, and adding a hard case and cleaning cloth for free! And with free shipping, you just can’t lose by purchasing these as a gift!

Here’s a product from the NRAstore™ that not many people think to buy, but every car needs a set of these. These absorbent coasters fit into the bottom of the cup holders in your car and soak up any moisture caused by beverage sweating. You get two for just $6.95, so you can pick up several sets at a great price.

Viking Tactics makes by far one of the most popular series of slings on the market, with their original sling being their flagship product. Reliability and versatility are the most important features in a sling, and VTAC delivers on both counts. Instant adjustability allows shooters to transition between shooting positions easily or to a hands-free position for transition to pistol. And with a variety of attachement options, the shooter who receives the VTAC sling can choose the attachment method that works best for their needs.

Julie Golob is one of the best female pistol shooters on the planet, and there’s a lot of buzz about her new book, SHOOT. A guide to shooting and competition, this book is one that both men and women alike can use to learn something new. Although it won’t be available until 2012, it’s now available for preorder and the first 500 people to preorder before December 17th will receive a personalized, autographed bookmark from Julie!

Ok, ok. I know this is the second item on my list from the Noveske Shooting Team, but the K9 is another great piece of gear that every shooter needs on their rifle. If you’ve ever shot using an unsteady barricade, you know it’s not much fun. Thanks to the K9, your rifle will now be ready to brace against and barricade, door frame, or port.

Do I really need to explain why this item is on the list? The Dillo Beverage Entry tool has become one of LaRue Tactical’s most loved products, making appearance at trade shows, competitions, and in orders shipped. You get a set of six Holiday Dillos in a pack, allowing you to spread lot of holiday cheer as people open their holiday cheer.

We all know about the great tactical flashlights from SureFire, and I’ve sung their praises before. But I was given a SureFire pen as a gift, and it’s the coolest pen I’ve ever written with. Made from durable aerospace aluminum and a Mil-Spec hard anodized finish, this pen writes well and is truly the most badass pen on the market because it’s strength allows it help in an emergency situation, be it breaking glass or for personal defense.

Zombies have certainly made their mark in pop culture in 2011 from TV, to film, and even on the range through targets and ammunition. Whether you’re a believer in the Zombie Apocalypse or think it’s just plain funny, Hornady’s Zombie Maxammunition makes a statement in anyone’s stocking. Available for pistols, rifles, and shotguns, Zombie Max has shooters ready to deal with the walking dead… or Michael Jackson’s “Thriller” video.

These caught my eye at a military tradeshow, and I knew they’d be the perfect addition to this gift list. I’m a huge fan of Oakley products, from their sunglasses to their boots, but these gloves are incredibly breathable and have carbon fiber knuckle plating! They’re all weather which means these gloves are perfect for any outdoor activity including hunting, cold-weather range sessions, or a camping trip.