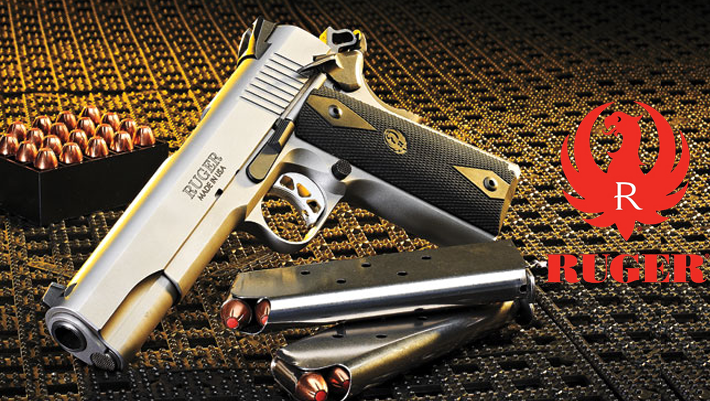 My formative pistol years (the “age of darkness,” as Metcalf calls it), were spent shooting striker-fired DAO autos with polymer frames. I was certainly familiar with 1911s, like most shooters on the planet. Heck, I even own a couple today. But I don’t hang a halo around the 1911, because, after all, it’s just a pistol, one whose design is more than 100 years old.

Dissecting the Ruger would be a team effort. I leaned on Metcalf’s encyclopedic knowledge of the 1911 for historical perspective (he was, after all, a history professor) and one of Ruger’s product managers, Mark Gurney, for the dirty details.

The Sum of Its Parts
There are several things to like about Ruger’s SR-1911—new materials, new manufacturing processes and a very affordable price. Gurney told us the idea had been batted around for decades, but Ruger only got really serious about things a year ago and went from a blank sheet of paper to a pistol in less than a year.

It is a simple and—if you’re of the “less is more” school—elegant rendering. The end product, from the start, was determined by shooters and sellers.

“If you let aficionados design a pistol, you end up with something few can afford,” Gurney says. “Our pistol product manager Kurt Hindle traveled the country talking to distributors and dealers about what really sells and to shooters about what they wanted.”

Shooters wanted a full-size, five-inch gun in stainless steel with a few upgrades that have become the norm on even basic 1911s. The Ruger SR-1911 does not have scaled slide serrations or grooves on top. It is not melted, chopped or otherwise abbreviated. The guts are a return to basics, with one exception.

Anyone who is serious about 1911s usually loathes Colt’s Series 80 firing-pin block, which added one more burden on the trigger. But Ruger did not utilize the 1930s-era Swartz system currently used by Kimber and Smith & Wesson (actually a modernized version of the Swartz) that uses the grip safety—not the trigger—to disengage a firing-pin block.

In fact, Ruger did not use a mechanical firing-pin block at all, but went with a low-mass, titanium firing pin and a heavy firing-pin spring. This setup passes industry drop tests, but may cause California shooters some angst since the bureaucrats there require other mechanisms such as loaded chamber indicators and magazine safeties that aren’t really at home in a classic 1911.

Purism Vs. Practicality
One of the long-raging debates in the 1911 community is the use of full-length guide rods and coned barrels vs. sticking with something that was “the way John Moses Browning intended.” I have shot most of the different designs without issue. Pistols with a full-length guide rod seem to be a touch more accurate, at least in my experience. Ruger went with Browning’s original bushing, short guide rod and plunger mostly because that setup is reliable, easy to manufacture and what most people wanted in a basic 1911.

“A coned barrel must be closely fitted to the slide,” Gurney says, “and can quickly get expensive if mistakes are made. We ended up using a bushing that must be fit to the barrel, which confines the tighter tolerances to a smaller, less expensive part. It’s a win-win here—the classic 1911 design that many customers prefer comes with less manufacturing risk. In addition, a conventional barrel with a bushing is more universal and offers more latitude in using aftermarket parts.

A barrel link and internal extractor—not a cam block or coil-spring-powered external extractor—are used for many of the same reasons. And the skeletonized, low-mass hammer looks great and is as functional as the old knurled spur.
As you might have guessed, the pioneers of investment casting used a few castings. The frame is cast from Ruger-proprietary 415 stainless steel. The custom pistolsmiths and purists are probably now throwing this issue of Guns & Ammo across the room, but the plain and simple truth is that cast parts, including frames, work fine.

Heck, aluminum-framed 1911s have been around for years (most of my pistols have plastic molded frames). Ruger’s in-house investment-casting division, Pine Tree Castings, has been making 1911 frames for other companies for decades, and some of those companies build very high-end competition pistols that handle tens of thousands of rounds each year without issue.

“The 1911 is not an easy pistol to build,” Gurney says. “Many of the custom houses make their parts slightly oversize and then hand fit them, but that’s expensive. Many people can’t spend that much money, so our charge was to make an affordable, good-fitting and -feeling, accurate pistol that people are proud to own. Cast frames allow us to do that.”

In fact, nearly every part in the pistol is a casting, or metal injection molded, except the slide, which is machined from 416 stainless steel. Why not cast the slide?

“A 1911 slide lacks the complex geometry that is present, for example, in a P-Series pistol and doesn’t allow the cost benefits of an investment casting to shine,” Gurney says. “In the end, it came down to cost. We can machine a slide from bar stock less expensively than we can make it from a casting.”

Barrels are made in-house, and though Ruger is big on hammer forging, the integral feed ramp of the 1911 required too large a forging blank to allow that process. Instead, the 410 stainless steel barrels are broached. Both the frame and feed ramp are given a mirror polish to improve reliability with various bullet profiles.

Having shot a 1911 manufactured in 1917 and some other close-to-original copies of mil-spec World War II-issue pistols, I can say a few things about the original 1911. It points and feels great, but it has a so-so trigger, lousy sights and smallish safety, and if you get cute, the hammer/slide will bite you. All these shortcomings have been dealt with over the past 70 or 80 years, and Ruger smartly followed suit.

The long trigger is skeletonized aluminum with an overtravel stop. It is also smooth with a clean break; the sample averaged four pounds, eight ounces. The thumb safety is not oversize like those on race guns, but it has a slightly longer and wider paddle than G.I. spec. The same goes for the magazine release. The mainspring housing was another tough call, but more people wanted the flat version instead of an arched housing, and it wears fine checkering.

“The safety is larger than the original, but it’s not so big as to be called oversize,” Gurney says. “People wanted a speed bump and a beavertail grip safety. Those are concessions to shootability.”

One critical addition, especially for those of us who grew up shooting with a grip so high it’s almost off the pistol, is a hammer-cupping beavertail grip safety with a speed bump. Lack of bite is the obvious advantage, but the speed bump alleviates my biggest complaint about original 1911s—they do not go bang every time I pull the trigger. It is no fault of the pistol, but my grip has evolved aggressively upward to the point that a 1911’s grip safety is not depressed enough to be disengaged. Although a few rubberbands or a small plastic wedge would solve the problem, the speed bump solves it right out of the box and looks better (though Browning, for the record, never saw the need for a grip safety in the first place).

Novak sights with a three-dot pattern are standard, and they sit in a dovetail slot and are adjustable for windage. The rear sight is locked in place with a small set screw. The sight height was designed to put bullets in the 185- to 230-grain range on target (plus or minus two inches at 25 yards), but commonly available front sights of varying heights should easily fix any point-of-impact issues if your ammo gets exotic.

Ruger heat-treats the stainless steel barrel, slide and frame in-house, and once all the parts are properly fit, it gives the pistol a matte, bead-blast finish that is quite attractive. The sights, slide lock, magazine release, grip and thumb safeties are matte black. Rubber grips from Hogue are also flat black and have the classic diamond-shaped checkering interruption around the grip screws. My dad used to joke that, if rained-in, a fellow could always sit in camp and read his Ruger. That is not the case with the SR-1911.

“We tried to engrave the entire manual on the slide but could not get the font size small enough,” Gurney jokes. “Actually, a great deal of effort went into choosing every detail of the engraving. We wanted a classy, classic-looking 1911 that was undeniably a Ruger.”

The frame is laser engraved with a serial number and place of manufacture, as required, and the right-side slide flat wears the Ruger phoenix. The caution to “read the owner’s manual” is presented neatly on the bottom of the dustcover. Prominently engraved on the left-side slide flat is “Ruger” and “Made in the USA.”

“We make the frame, slide, barrel and barrel bushing here at Ruger,” Gurney says. “Other parts are produced for us by contractors, but every part is made right here in the United States—every part.”

The SR-1911 ships with two magazines, one with seven-round capacity and the other with eight. The stainless steel magazines, also produced in the U.S., do not come with bump pads, but they are drilled and tapped so that one could easily retrofit them should they want them.

Running the Gun
We had the SR-1911 (I say “we” because it was tough to pry it out of Metcalf’s hands and everyone else who saw it) for a very brief period, but we were able to give it a thorough evaluation. Volunteers were stacked five deep at the firing line, and in short order the sample pistol had 1,500 rounds downrange without a single failure to feed, fire or function. Accuracy was decent with the usual suspects—the more common carry loads—and it had an overall average of 3.65 inches for five-shot groups fired at 25 yards from a rest.

So how does the SR-1911 compare with other 1911s on the market? Pretty damn well. The pistol is accurate and reliable and will eat anything from 230-grain ball to “flying ashtray” JHPs and put them all into decent groups. Most custom 1911s will shoot groups half the size or smaller but cost three or four times as much as the Ruger. The pistol’s fit and finish is exceptional, and the operating system is ideal for those hell bent on having their 1911 “the way John Moses Browning intended.”

Even for younger handgunners who don’t get weepy-eyed at the mention of ol’ slabsides, the SR-1911 will do wonderfully for self-defense or a day at the range. It packs a wallop but is, as tens of thousands will testify, a pistol that shoots easily and points naturally.

Given the fact that its street price should settle at around $640, the SR-1911 is eminently affordable. Purists such as Mr. Metcalf can certainly appreciate the SR-1911’s homage to its martial roots—save a few refinements that make it shoot and handle better.

Ruger has heavily impacted the handgun market recently with innovative new products such as the LCP and LCR, which are startling in their use of new technologies and Yankee innovation to solve old problems.

The SR-1911 is a straight-up, straight-down old design, and there is not an original part in it. But this still-effective platform has been wonderfully done, and the sum of these parts is an elegant, practical pistol that gives you a lot for your dollar.

The SR-1911, as you’d expect considering its lineage, will do wonderfully for self-defense or a day at the range.

This article was originally posted by J. Guthrie