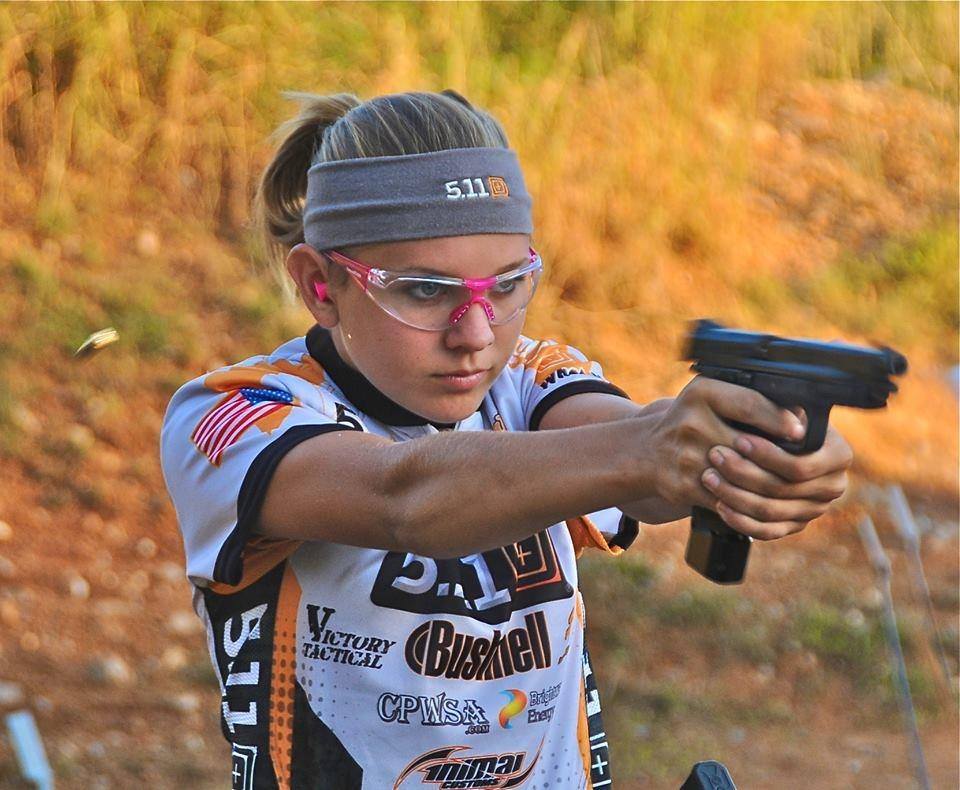 Katie admits that of all the guns she uses, the shotgun is her favorite. (Photo credit: News Tribune)

As the ABC news team traveled around the country collecting stories on the impact of guns on American lives, they picked up one story of a St. Thomas, Missouri 14-year-old girl who’s quickly becoming an iconic heroine for both gun rights and shooting sports. Katelyn “Katie” Francis’ story will be one piece of a special ABC segment which will be aired sometime next month.

ABC’s World News anchor, David Muir spent the day with Katie, putting together a sort of “Day in the Life” piece for the special segment. Muir talked with Katie about growing up, the camera crew followed her to school, they talked with her family and, of course, they filmed her shooting at her grandfather’s farm.

But it wasn’t without reserve that her parents agreed to the interview. In fact, they initially said no when the station first contacted them for an interview three months ago.

“We thought they were going to crucify us,” said Julie, Katie’s mother.

Muir said that the news crew was working to open up a “conversation about guns in America.” And after the crew convinced Katie’s father, Chad, that their home would be portrayed as one that emphasized gun safety and respect, he finally agreed to the interview.

“Katie’s story is unique in that she has not only her family, but a community, rallying behind her,” Muir said, who was particularly struck by a photo of Katie which appeared on her Facebook page and featured the teen dressed up for a school dance while holding a rifle. “It’s this juxtaposition of images that makes Katie a charming and interesting young woman,” he said.

And she’s a young woman who has found a new way to start a conversation about gun safety, according to Muir, who also said, “It’s important to find consensus on this issue of gun safety in America.”

“If you are taught how to be safe, and how to excel, can it set an example for others about what it means to be truly safe around guns?” Muir posed.

“It’s a controversial topic, no doubt,” Muir added. “And not every parent will agree about how they’ve [Katie’s parents] raised their children. But they are determined to keep their kids safe. They hope to prove, by demystifying guns, they will help keep this country safe.”

During the three-gun competitions, Katie competes against other shooters of all ages and backgrounds, even professionals. (Photo credit: News Tribune)

And Katie’s father, a marksmen instructor for the Missouri National Guard who also teaches soldiers how to shoot, is adamant about safety and instills it in his girls form a very young age.

“I make them recite the rules, even if they don’t want to shoot. I think everyone should know the safety aspects,” he said.

He also points out that many people don’t even realize that shooting is a sport. “It is like any other sport, it teaches confidence and responsibility,” Chad said.

Katie admits that two of the most fun aspects of competing are have the opportunity to travel out of the state and trying out new guns. But it’s more than just fun and games for her. In fact, she radiates the very respect that her father speaks of, conceding that she realizes guns are not toys and, in fact, she dislikes video games which portray them as such.

“They show that it’s okay to point them at people and shoot, and it’s not,” she said. “You need to have respect for guns in the real world.”

Although she’s a self-proclaimed girly girl who polishes her nails every night, Katie also practices each night for her three gun competitions, which entails her running through an outside course – some with obstacles – hitting targets while switching between a rifle, shotgun and pistol.

When the weather permits, she can be found outside shooting at targets, but other nights she practices different and equally as important skills, like loading her shotgun quickly and efficiently.

But despite her small stature, young age and girlish charm, she can give any grown man a run for his money when it comes to competitive shooting.

Eleven months out of the year Katie competes in three-gun competitions. This is her third year competing and she is quickly rising through the ranks.

“I’ve progressed in every single one of my competitions,” she said.

In fact, she’s done so well that she now has multiple sponsors who help her to pay for things like new guns, clothing, ammo, tournament fees and safety equipment, to name a few. But, of course, some of those sponsors, like her own parents, realize that her education is still the number one priority and have put grade point requirements on her sponsorships, something which has never been a problem for her.

And although her parents have no doubt received criticism for letting their daughter compete in such a sport, they are delighted with her passion and talent and will continue to allow her to shoot competitively for as long as she wishes.

Katie said she would like to one day compete in the Olympics, but as for right now, the eighth-grader admits, “I just want to have fun.” Adding, “It is definitely fun.”