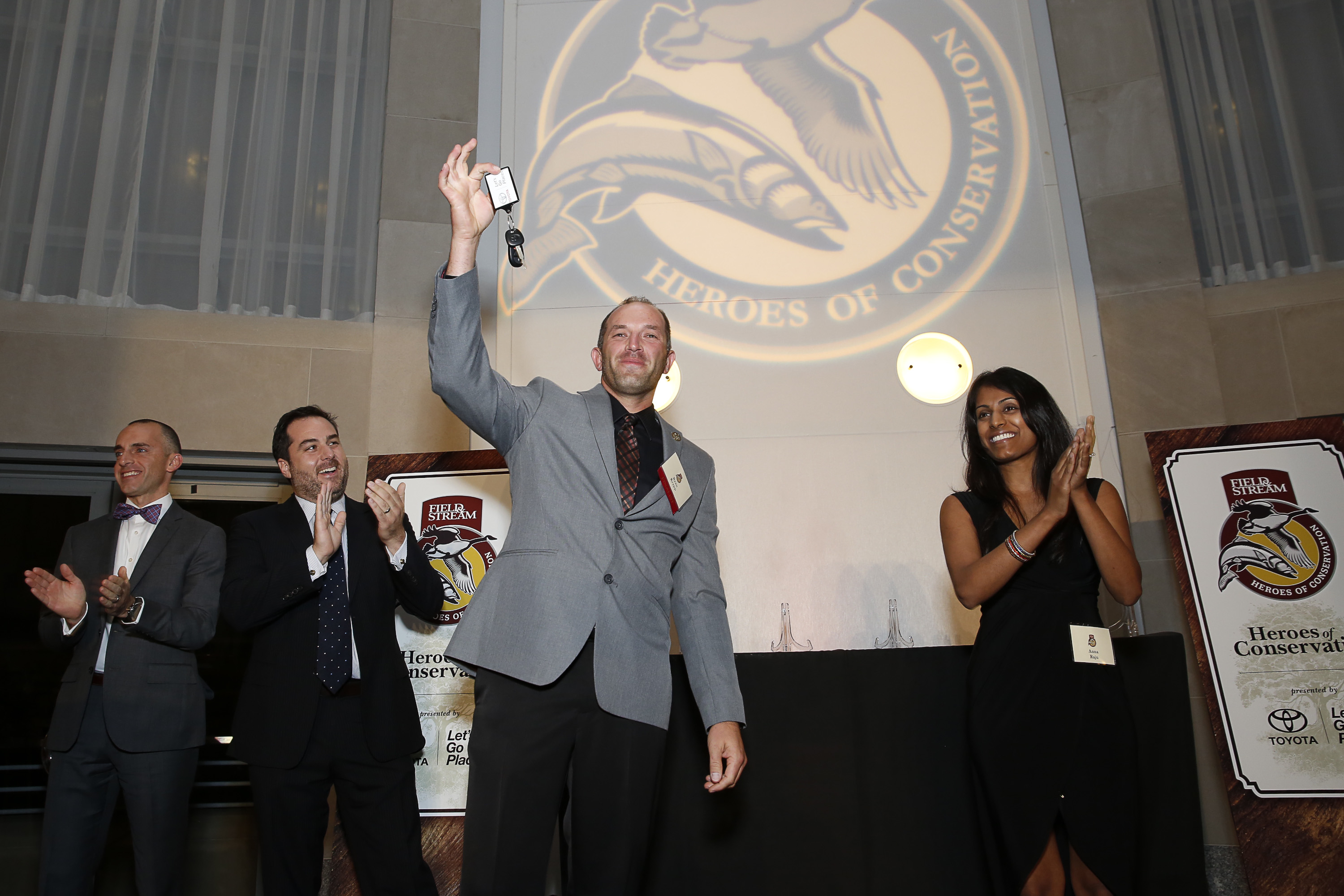 Field & Stream, the worlds leading outdoor magazine, announced today that Ryan Krapp of Bismarck, N.D., has been named the publications 2014 Conservation Hero of the Year. Field & Streams Heroes of Conservation program, now in its ninth year, is dedicated to honoring volunteers involved in grassroots projects that protect and maintain fish and wildlife habitat across the country.

As state chair of the North Dakota Mule Deer Foundation for two years, and a leader of his local chapter for six years before that, Krapp has been instrumental in raising the funds to enroll land-owners in the states Private Land Open to Sportsmen (PLOTS) program. He also spearheaded a $75,000 prescribed burn project, which should take place this spring. Krapp, who has his masters in wildlife and fisheries biology, is also working with his contacts in the energy industry to lobby for a more balanced approach to oil and gas development.

Krapp was awarded the honor at a gala event in Washington, D.C., the evening of September 17 where he was one of six finalists in the running for the title. Each of the finalists was presented with a $5,000 grant and Krapp was also awarded a new Toyota Tundra, courtesy of Toyota Motor Sales, U.S.A. Inc.  The honorees are all featured in the October issue of Field & Stream, on newsstands now, and are also profiled in a twelve-part video series online.

Ryans volunteerism has the potential to positively impact conservation for generations to come, said Anthony Licata, Editorial Director of Field & Stream. North Dakota is in the midst of an energy boom making Ryans work to ensure the states wildlife heritage all the more essential.

Besides winner Krapp, the five honorees recognized as finalists at the event included:

Bill Anderson of Altoona, Pa., is leading the Little Juniata River Association in a full-scale habitat improvement and restoration project of the namesake river.

Ron Crabtree of Murfreesboro, Tenn., is a major voice for bobwhite quail, lobbying for the birds habitat needs and enrolling landowners in conservation programs to benefit the birds.

Ken Miracle of Boise, Idaho, a photographer who donates his images to benefit sage grouse and also works hands-on to restore wet meadows–important areas for sage grouse chicks to feed.

“This is a very important program to Toyota because it acknowledges individuals who go out of their way to make the environment a better place,” said Steve Appelbaum, National Manager, Engagement Marketing, Toyota Motor Sales. These people aren’t looking for gratitude or recognition. Instead, they work tirelessly because they want to make a difference – for our generation and generations to come. We take great pride in being able to spotlight their efforts on a national stage.”

Field & Stream has been committed to the preservation of natural resources for more than 100 years. The magazine, founded in part to help inform outdoorsmen about conservation and ethics measures, helped to popularize the term conservation ethic in 1907.  In 2005, Field & Stream continued that tradition with an article titled Heroes of Conservation, focused on the local efforts of everyday outdoorsmen. Out of this, a new program was created to recognize sportsmens efforts to protect fish and wildlife. Since the introduction of the program, the magazine has been proud to profile and support the conservation efforts of more than 200 men and women.

The Heroes of Conservation Awards are open to individuals involved in a hunting- and/or fishing-related conservation project that is well under way or completed. Selections are based on a number of factors, including leadership, commitment, project growth, and results. For complete details, including rules, regulations, and nomination instructions, please visit fieldandstream.com/heroes.